In Narrative, Unit 3, VCE Media
The production element camera is the way that the camera is positioned to capture a scene, and the techniques and qualities and technologies used. This includes format, shot selection, angles and movement.

The format chosen for a film affects the look and the mood of a film.

Different formats include black and white film, colour film, 35mm, 70mm, digital video, video and animation. Often the format reflects the genre of film. A Film Noir film is usually in black and white whilst a musical will be in vivid colour.

The choice of a film’s format is a conscious decision. Hitchcock chose to shoot ‘Psycho’ in black and white when he could of shot it in colour. The newest film format these days is digital 3D and even motion capture. 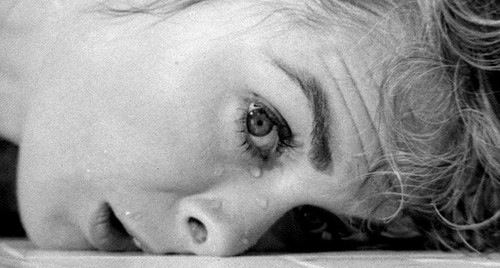 1.1 Explain why Hitchcock chose to film Psycho in black and white.

1.2 You can find out what format any film was shot in by checking the “technical specs” section of it’s http://imdb.com page. Find one film shot on film and one shot on digital. Can you tell the difference between the two?

Shot selection demands an emotional response to characters, objects and action. The further away from the object, the less emotionally involved the audience is asked to be.

Extreme Close Up: A tight shot that shows only one object. Used to focus the audiences attention on a single significant object that holds great importance.

Close Up: A shot from the shoulders up. Often used as a reaction shot. Usually has the effect of adding or heightening attention.

Mid Shot: A shot from about the thighs up. The most common shot in films. Emphasises the character and shows them in their environment.

Long Shot: Includes the whole body of a person. Allows for greater action and movement from the character.

Extreme Long Shot: Character is almost lost in landscape. The environment is usually the important factor in this shot.

Establishing Shot: Usually an Extreme Long Shot and the start of a scene that lets the viewer know where it is set.

The Hitchcock Rule: The size of the object within the frame should be directly related to its importance to the story at that moment.

1.3 Choose a scene from http://movieclips.com and analyse each shot type for the first ten shots of the scene. Use a table that looks like this example:

Movement can be used to create emotion within the audience or to draw the audience’s attention to a particular object or character.

1.4 Describe how and why camera movement is used in this scene from “The Godfather” http://cli.ps/S3dX

1.5 Find a clip on movieclips.com that uses camera movement. Describe the movement and explain why the director used that movement and what effect it has on the audience.